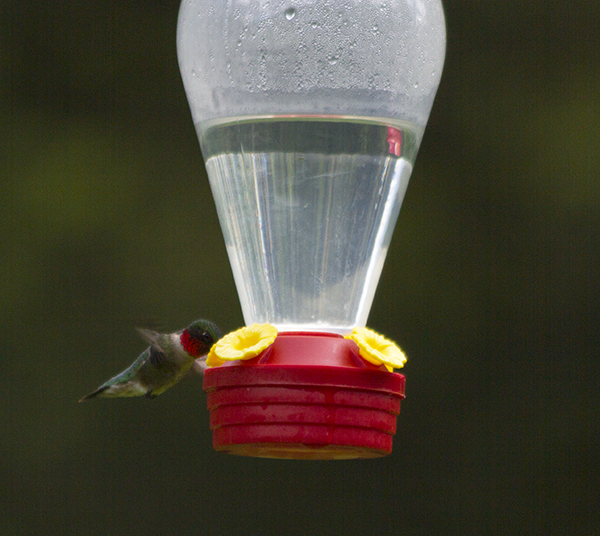 Spring has finally arrived in the Laurel Highlands, bringing the first hummingbirds back from migration. The first male was spotted at the house over the weekend. The Hummingbird Retreat is home during the summer months to over a dozen ruby throated hummingbirds. We have had an unseasonably cold March and April and have been worried for our little feathered friends.

Hummingbirds migrate south in late summer and early fall to the warmer climates of Florida, Texas, Mexico and Central America and return in the Spring.  While Hummingbirds can survive cold temperatures, they are dependent on insects and flower nectar for food. Our cold spring has delayed the emergence of insects and blooming flowers so we have put out several feeders to help out.

Males typically show up first and are easily distinguishable from females due to their bright ruby colored throats. The males like to arrive early to seek out the best territory for  attracting  mates. This also puts males at a greater risk if they arrive before their food supply has.  The females, while less flashy but apparently more sense will follow, arriving  in a few weeks after flowers and insects have become more plentiful along their migration route. They need  steadier food sources as they will begin nesting soon after arrival.

There are a couple sites that track their migration in the spring. Our favorite site is http://www.hummingbirds.net/map.html .  They encourage people to post their sightings of hummingbirds as they first arrive in their areas as well as pictures. It also has information about different species, their behavior and useful tips for attracting hummingbirds.